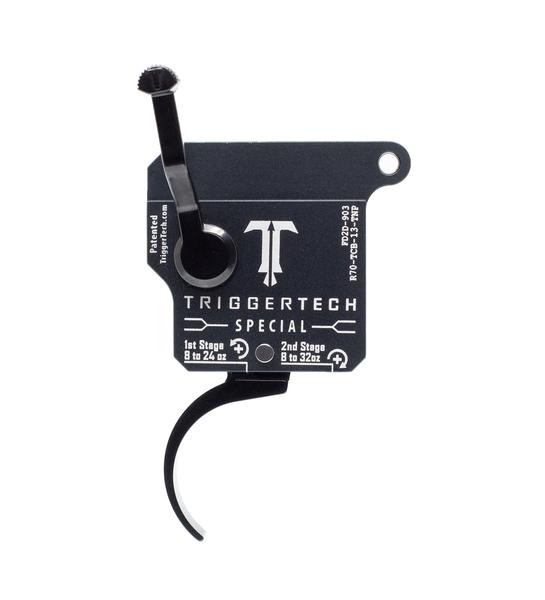 Without bolt release.  (Not needed for American Rifle Company actions.)

Black safety and trigger only.

PVD Black – PVD stands for Physical Vapour Deposition. It is a hard and durable coating that is applied to external stainless components to give them a clean black color.

Our most complex and technologically advanced trigger yet. Developed with the same unmatched zero-creep break, tactile pull weight adjustment (on both stages), rugged design, and no compromise engineering. Our focus on safety led us to develop the first Rem 700 trigger with four points of safety. This is a new level of performance and safety for those who prefer some movement before the wall. Four points of safety:

Ticker Blocker – prevents the ticker from moving while on safe.

Sear Blocker – prevents the sear from dropping while on safe.

First-Stage Lockout – the tumbler locks out the first stage while on safe. The first-stage will not move while on safe, giving the shooter immediate confirmation that the safety is engaged.

The adjustment feature utilizes externally accessible set screw for both stages. Due to the exceptionally crisp break the activation energy is less than friction-based triggers. Most shooters report the pull weights feeling significantly lighter than a friction-based trigger of the same measured weight. The triggers components are assembled as a matched set to enable a true zero-creep break, extremely short overtravel and offers outstanding reliability, even in the harshest environments. Frictionless Release Technology™, along with hardened 440C stainless steel internal components ensure corrosion resistance and an extended service life. As Frictionless Release Technology™ does not rely on coating, polishing or lubricating the key engagement surfaces, trigger pulls will be more consistent from shot to shot and after thousands of shots more than you ever thought possible.